Amidst all of the chaos in the media and our nation, I am often torn between anger, frustration, sympathy, understanding, ignorance, and awareness. I know a lot of people are upset. I know we’re all angry. But why? Everyone has a right to their opinion, a right to voice it, and a right to say something. So here is what I have to say…

In 2006, my mom, sister and I packed up our life on 79th and Exchange and moved in with my stepfather into the Beverly neighborhood of Chicago. I went from going to all-black elementary schools, to a majority white school in a majority white neighborhood. It was quite the culture shock for me. I felt like an outsider. For the four years I attended that school, that is how I always felt.

If you have white privilege, imagine yourself in that situation. Imagine leaving your all white school and moving to an all black neighborhood. Imagine being the only white student in the classroom. Imagine all of your classmates having a higher socioeconomic status. Imagine being a child of a low-income family, in a school full of rich privileged children. Imagine it.

When time came around to choose a high school to attend, I was set on De La Salle. I planned to follow my sister’s footsteps in becoming a Meteor. Mother McAuley was never really a thought in my mind. I heard rumors of racism at McAuley and figured that’s not the place for me. Somehow, my parents convinced me to change my mind and deal with the convenience of McAuley being just 2 miles away. Four years later, I thanked God for the convenience. I made amazing friendships, went on eye-opening retreats like Kairos, had a successful high school track career, and the rumors of racism were defied. Or so I thought.

Fortunately, I never really dealt with firsthand racism at McAuley, but I am sure some of my classmates unfortunately did. I’ve always been known to be friends with everybody. I never liked conflict or drama and personally, the most drama I ever dealt with was getting my teammates to show up to practice. Everyone knew that. But outside of my little bubble, I felt the tension at times. I saw the separation. Most black and Latina girls usually sat in the lounge for lunch instead of the cafeteria. Some of our white friends would make ignorant jokes about our hair, the way we talked, or the way we dressed. Some of them mocked our anger and attitudes when these racist issues did arise. But at the end of the day, we laughed at lunch, we cried together on Kairos, we practiced together in sports, and we all still sat in the same classrooms. We sat side by side in the same classrooms. Yet now, many of us stand on different sides. Where is the middle ground?

Attending my first year of college at Saint Xavier University was such a beautiful thing to me. The diversity was unbelievable. I never had friends who weren’t Christian or Catholic. I never had friends of several different cultures. I absolutely LOVED it. It amazed me that so many of us came from different backgrounds and cultures, and we actually appreciated each other. What a beautiful thing, right?

Since my freshman year, I’ve been exposed and educated on so many issues in our society. On service trips, I’ve learned the Catholic Social Teachings which really don’t have to be labelled Catholic if you give a crap about humanity and the Earth. I’ve learned about gentrification, social justice, the critical concerns of Mercy, and just about everything that’s wrong with our society. I am proud to have a circle of friends and community on campus that works so hard to change these things around, but there’s something some of you just don’t understand.

Ignorance is not bliss. Black Lives Matter. Simple as that.

There is something that some of you do not, cannot, and will not ever understand unless you were born with a different color of skin. The BLM Movement is not anti-white. The BLM Movement is not against you. The BLM Movement wants you to understand what it feels like to be a person of color. I’ve grown up in two different parts of the city. One where I was criticized because I was too light and one where now I am too dark. I’ve grown up in an area of constant sirens, drive-by’s in front my eyes, gunshots never mistaken for fireworks, thugs, drug dealers, the beauty of lake shore drive, walks with my brother and nephew to the corner store for candy, close enough to my aunt’s house where our dogs knew their way there and back, fences around every house front and back, the same kinda neighborhood some of you are shocked to see on the Breadtruck in the Back-of-the-Yards, or on the history films in our History class. The same area that’s just 20 minutes from the privileged Mt. Greenwood, Evergreen Park, and Oak Lawn. The area you only see on the news when someone is shot. The area where our people came to work hard and your people just couldn’t take it so they moved out. The area where Chicago Public Schools struggle for resources and teachers, but it’s the only option for struggling low-income families. The area you’ve never experienced living in, and probably never will.

I’ve also grown up in the good ole’ Beverly Hills, Longwood Dr., the Rock island Metra, the million dollar mansions that align Longwood Dr., the other side of the tracks, barely 5 minutes from the gas station where a man was shot multiple times to his death, the landmark of the South Side Irish parade, Western Ave. bar crawls, grammar school football games at Beverly Park and neighborhood kids always roaming at any time of the night, immediate police action, a flourish of city officers, firemen, policemen, and stay-at-home moms. It has it’s downsides, but it’s quite a privileged area to live. The diversity has increased, but it hasn’t always been there. And as it’s becoming more diverse, more problems arise. Almost like it’s not our turf.

Do you know what it feels like being a person of color living in this privileged area? It’s terrifying sometimes. My white friends can do dumb college kid things, but if one of us does it, we are animals, delinquents, uneducated, even though we attend the same college. My freshman year of cross country, my teammates told me we don’t run past Western Ave. because it’s not that safe. Yet I felt more safe running towards home than through the neighborhood of Mt. Greenwood, because of the color of my skin. I was always nervous getting dropped off at a friends house in Mt. Greenwood because I didn’t like the skeptical looks from their neighbors. As much as I love being with my friends and being able to celebrate St. Patty’s Day with them, there is always a fear and feeling of not belonging. There is always a feeling “They probably don’t want me here”. On campus and in our university programs, we fear administrators will underestimate us and our ability. We are constantly being judged, constantly being watched, constantly under the microscope. Do you know what it’s like to live life in fear simply because of the color of your skin?

It’s hard being a person of color.

It is not hard to not be racist. 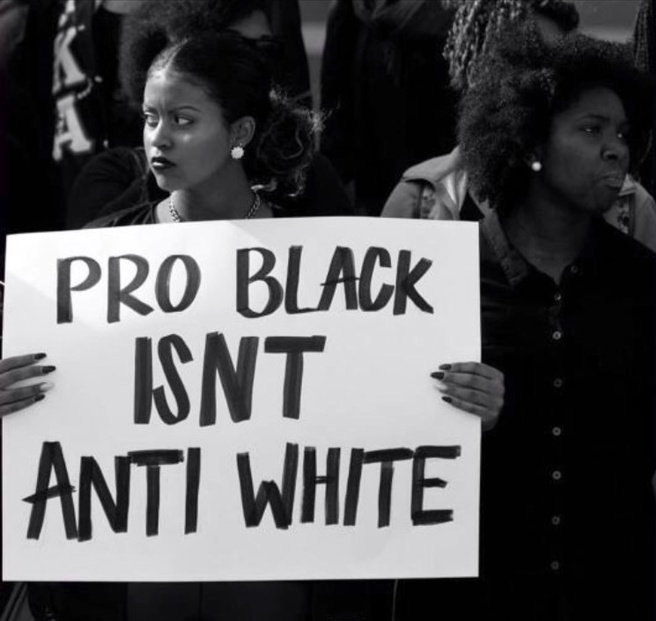 5 thoughts on “A View From The Other Side”